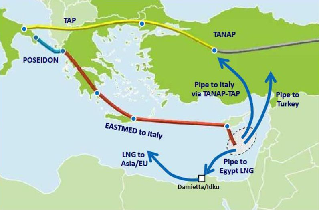 Once completed the 1,900 kilometer pipeline (1,180 miles) will be the longest in the world.

The government is set Sunday to approve the agreement Israel signed in January with Cyprus and Greece to advance the EastMed gas pipeline project.
Once completed the 1,900 kilometer pipeline (1,180 miles) will be the longest in the world. The bulk of it will be under the sea, but some portions will be on land. The pipeline will allow for natural gas from Israeli and Cypriot fields to flow to western and eastern Europe. The pipeline will start in Israel and then go via Cyprus and Greece and through Italy.

This gas pipeline has the potential of making Israel and Cyprus the energy powerhouse for Europe, during the remainder of the 21st Century.

Also, this pipeline will ignite the wrath of Israel's enemies, including Turkey and Iran, who will do whatever they can to stop this project.

Due to this, Israel, Cyprus and Greece are upgrading their military alliance, in order to counteract the opposing forces.