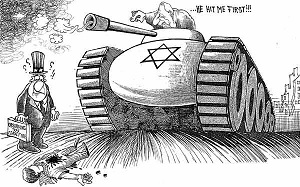 Israel-Advocacy Groups Urge Facebook to Label Criticism of Israel as Hate Speech
ON AUGUST 7th, amid broad efforts to get Facebook to clamp down on extremist activity and hate speech, more than 120 organizations sent a letter to the social media giant, urging it to “fully adopt” the International Holocaust Remembrance Alliance (IHRA) working definition of antisemitism as the “cornerstone of Facebook’s hate speech policy regarding antisemitism.” This definition, which was adopted by the IHRA in 2016 and has been promoted to governments worldwide, includes several examples of what it describes as “contemporary” antisemitism—including “denying the Jewish people their right to self-determination, e.g., by claiming that the existence of a State of Israel is a racist endeavor” and “applying double standards” to Israel—that can be interpreted to define much criticism of Israel, Israeli policies, or Zionism as antisemitism.